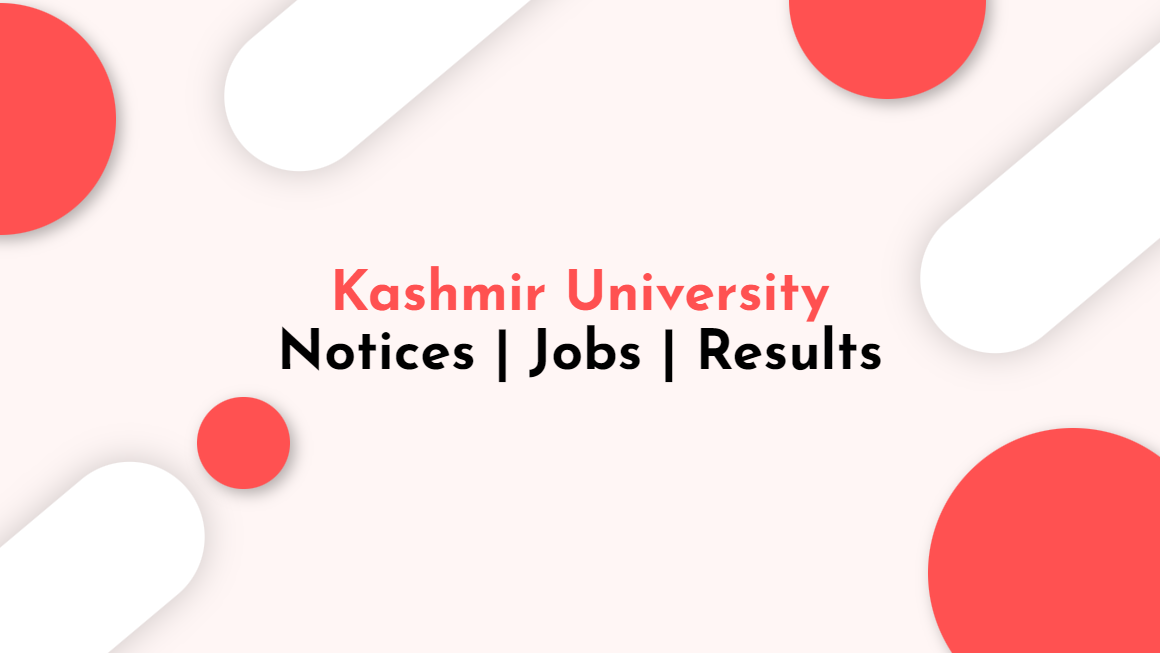 The Kashmir University (KU) is a premier institution of higher learning in Jammu and Kashmir.

It boasts of having attained Grade A-Plus in assessment by National Assessment and Accreditation Council (NAAC) while also figuring at 47th position in the all-India ranking of universities by the Ministry of Education under its National Institutional Ranking Framework (NIRF).

But given the oft-repeated poor performance of its Examination Wing, all the claims of having achieved academic excellence appear to be both exaggerated and hyperbolic.

No serious and concerted effort is being made to bring about necessary reforms in the Examination Wing to boost its performance and ease the suffering of students. That's the reason why students are forced to hit the streets most often to seek timely declaration of their results for timely completion of their degrees.

Let us take an example of the outgoing 6th semester undergraduate students of different KU-affiliated colleges. The students were enrolled in colleges in 2018 and were supposed to complete their three-year degrees in 2020. But the students are yet to complete their degree despite the passage of more than four years.

The OMR based 6th semester examination of students culminated on December 13. The students were expecting their results in a week’s time considering the less involvement of human resource for evaluation of the answer scripts.

However, more than a month has passed and the University’s examination department is yet to declare the result of the students and award them their degrees. The result was delayed due to official wrangles as admitted by the concerned officials but now the officials at the Examination Wing are attributing the delay in declaration of results to the rise in COVID-19 cases, which is not justified at all.

There are several other examples to prove how absence of technological interventions in KU’s examination department has proved dearly for the students.

The date sheet for 4th semester examination was notified but has been postponed. The sequence of events clearly indicates the delay in holding the exams and shows how poorly the examination department has fared to implement the semester system of examination which was introduced some seven years ago at college level.

There is so much uncertainty about examinations among regular candidates of BG 2019 batch. These students should ideally be in 6th semester so that they could complete their degree in time.

Not only are the undergraduate degrees delayed, some degrees at PG level have consumed more than two years of the students as well.

It is a fact that COVID-19 caused lots of disruptions, but it is also a sad story that an institution which is more than 50 years old has yet to evolve a mechanism of holding Proctored Online Examinations (POE) to finish the tests in time in case of such eventualities and disruptions.

The University does not hold online examinations because their sanctity is often questioned. In the last few years, the University has often been in the news for breaching secrecy of examinations after it sent question papers of various undergraduate examinations to the colleges through a social media chatting application-WhatsApp.

Not only this, the examination department pocketed severe criticism for declaring erroneous results of students repeatedly which punctured the tall claims of the university of having brought reforms in the examination processes.

Taking a look at the past experience, this examination department has always remained a liability for the administrators and till date nothing has changed therein, much to the disappointment of the stakeholders, particularly the parents and students who are made to suffer and roam from pillar to post.

In 2020, the KU declared a flawed result of undergraduate students wherein majority of students were declared failed in the provisional result leaving students high and dry. Later, the University admitted the mistake saying the result was declared without collecting practical award sheets of students from the concerned colleges.

The varsity also admitted that there was discrepancy in the result of around 450 students who were declared unqualified by showing Later On (LO) and Not Available (NA) against their results. The errors occurred after the varsity adopted OMR based evaluation of answer scripts. Such errors will not give a clean chit to the varsity’s examination department for attributing everything to COVID-19 pandemic and inclement weather conditions in the Valley.

There are not only issues with the conduct of the examination and declaration of results, the University has failed to bring reforms in the evaluation process all these years.

Last year the University could not conduct the online examination of B.Ed students as it had no system in place to accommodate 10000 students in an online exam. Several meetings were held to introduce an advanced system and software to hold B.Ed exams through online mode but lack of advancement in the system forced the varsity examination department to conduct the B.Ed exams offline.

The University has a full-fledged IT department which could bring about necessary reforms but it is mostly confined to preparation of results. The department has not moved beyond registration of admission applications or submission of examination forms.

The irony is that the decade-old department at times cuts a sorry figure after students complain of serious errors in their admission and examination forms. The department has been confined to uploading notifications and other information of the university.

The problem, according to insiders, is also about poor supervision and leadership at the Examination Wing. For instance, the present Controller of Examination is holding the post as an additional charge. He is also holding charge of Chief Consultant Research, making him awfully busy with research-related matters. A Controller cannot be an additional assignment. It is a full-fledged assignment which has to be carried out with great commitment and dedication. That seems to be clearly missing at present, and many in the varsity allege that affairs of the whole Examination Wing have been left at the mercy of few junior officials lately in absence of a full-fledged Controller of Examination who could spend the whole time in the Wing that caters to lakhs of students.

No reforms have been made with regard to shifting of different domains of the Examination Wing fully on technological platforms. Degree Certificates and Marks sheets continue to be issued in a manual manner taking a lot of time and resources. The evaluation of answer scripts takes its own sweet time.

"If sensitive examination-related matters are outsourced to personal assistants and junior-level officials, it will only damage the sanctity and secrecy of the examination processes and the system as a whole," said a KU official, wishing anonymity.

The post of full-fledged Controller of Examinations was put to advertisement in early 2021. The interview of eligible candidates was held by a selection panel headed by the Vice Chancellor (VC) on September 11, 2021. Sources said the selection Committee recommendations were soon sent to the office of Chancellor for approval, but are pending there ever since. “We are waiting for the file to be cleared by the Chancellor's office. We are very hopeful,” a senior administrator at KU said, wishing anonymity.

Several reforms are needed at the Examination Wing to make it vibrant and student-friendly. To begin with, there is no substitute for introducing technology in its various domains to save time and resources. Why is a student from Kupwara or Uri still required to visit the Examination Wing to get his marks sheet, degree or document verification done? Why shouldn't technology solve these problems?

Secondly, accountability has to be ensured at all levels. The entire staff, especially the large pool of System Engineers, needs to be made fully accountable for any delay in results which leads to piled backlogs that only damage the University's reputation and perception in public circles. An official categorically acknowledged that the University’s public perception is bad mainly because of its examination woes which are not being addressed with seriousness and sense of permanence.

If all these measures are carried out with seriousness and policy interventions, that's the only way University can achieve academic excellence that it often claims to be aiming to achieve. If students continue to suffer for want of timely conduct of examinations, timely declaration of results and timely completion of degrees, it would only expose such claims of academic excellence as FARCE. No institution can afford such an ignominious hallmark!