We fixed some issues to boost the overall user experience. Report Bugs!
Verify that You are not a Robot
Are you a Robot?
Generating Link... Please Wait
I am not a Robot
Home
History
Know the History

Indian Islamic inscriptions date from the last decade of the 12th century AD when Muhammad Ghori conquered Delhi and established his kingdom there.
Please wait 0 seconds...
Scroll Down and click on Go to Link for destination
Congrats! Link is Generated 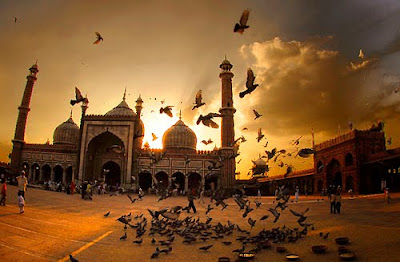 Indian Islamic inscriptions date from the last decade of the 12th century AD when Muhammad Ghori conquered Delhi and established his kingdom there. Certain movable objects like arms, seals, signets, vases, utensils and tombs account for majority of inscriptions, next followed by forts. The language of the records of the early period of the Delhi Sultanate is Arabic. Majority of epigraphical records is in Persian in view of the fact that Persian had been the state or official language right from the beginning of the Muslim rule. Persian played an important role in the educational and cultural life of the various regions of the sub-continent in varying degrees depending upon local factors. Apart from Arabic, Persian and Urdu inscriptions, there are bilingual. inscriptions, i.e. Arabic with regional languages like Gujarati, Marathi, Bengali, Tamil and Malayalam and Persian with the provincial languages like Kannada, Telugu, Oriya, Tamil, Gujarati and Marathi.

The sources of Medieval Indian history is richer than the sources of Ancient India. There are plenty of written records and memoirs. They are not without limitation. In fact, a large number of Muslim chroniclers enjoyed the patronage of the ruling princes and looked hardly beyond the court and the capital. For the sake of convenience it would rather be better to divide the source into following categories:

Al-Beruni, came to India and took up service under Mahmud of Ghazni. He was well acquainted in Arabic, Persian and had a great intellectual in Medicine, Logic, Mathematics, Philosophy, Theology and Religion. During his stay in India he learnt Sanskrit and studied Hindu religion and philosophy. He even translated two Sanskrit works into Arabic. His most important literary work being Tarikh-ul-Hind written in masterly Arabic with great accuracy and scholarly presentation, gives us an account of the literature, science and religion of the Hindus of the 11th century. The book gives us an account of India at the time of Mahmud of Gazni's invasion of India.

Chach-Nama is a historical work about the Atab conquest of Sindh. The book was originally written in Arabic and later translated into Persian. An account of Sindh before and after the invasion of Muhammad bin Qasim is highlighted in this Chach-Nama. The names of the places and details of important incidents are mentioned in this book. Through Chach-Nama, we get an inclusive idea about Sindh when it was dominated by the Arabs.

Kitab-ul-Yamini by Aby Naser-bin-Muhammad al Jabbarul Utbi, gave us information's about the reign of Subuktigin and Mahmud of Ghazni up to 1020 A.D.. Utbi has not given us any details, nor gave us the exact dates also. But his work has been considered as one of the most authentic work of the early life and activities of Muhmad.

In his book Taj-ul-Maasir, Hasan Nizami described the occurrences from 1192 to 1228 and thus became an important account on the career and reign of Qutub-ud-din Aibak and the early years of Iltutmish. His work is the primary source of the early years of the Sultanate period in Delhi.

Abul Hasan Yaminuddin Khusrau was one of the best scholars and poets of his age. He was a witness to the reign of Sultan Balban and got patronage of the Khilji rulers and even that of Ghiyasuddin Tughlaq. Primarily, Khusrau was not a historian but a poet. None of his work, therefore, can be considered historical material. Yet, as he described the events in a chronological order and honestly, much useful historical knowledge has been derived from his writings. Khusrau wrote much. However, important among his writings were Qiran-us-Sadain, Miftah-ul-Futuh, Ashiqa, Tughlaqanama, Tarikh-i-Alaie etc. Much of his writings were in form of poems though some of them were written in prose as well. Put together, his writings provide us good historical source-material.

Minhaj-us-Siraj concluded his famous work Tabqat-i-Nasiri sometimes in 1260 A.D. The book gave us an account of the conquest of Hindustan by Muhammad of Ghor. Minhaj was the chief Qazi in Delhi under Nasir-ud-din Mahmud. His book is a vital source of the early history of Delhi Sultanate.

Another important work is Kitab-ur-Rahlab a book of travels by the famous Moorish traveler, Ibn Battuta. Travelling Northern Africa, Arabia, Iran and Constantinople Ibn Battuta came to India in 1333. He remained in this country up to 1342 and was appointed by Muhammad-bin-Tughluq, the Qazi of Delhi for long eight years. The Sultan, however, became displeased with him and was dismissed and imprisoned though after some times he was released and sent to China in 1342 as an ambassador. Ibn Battuta wrote his book in Arabic. His work is also primary authority on the reign of Muhammad-bin-Tughluq and also the manners, customs and the condition of India during the Sultanate period. His work, however, suffers from some defects.

Zia-ud-din Barani wroteTarikh-i-Firozshahi Barani was an exact contemporary of Ghiyas-ud-din Tughluq, Muhammad-bin-Tughluq and Firoz Shah Tughluq. His work Started with Balban and came down to the sixth year of the reign of Firoz Tughluq. The work was completed in 1359 and thus was the most important work on the Khalji period, the reign of Muhammad-bin-Tughluq and a part of Firoz Tughluq's reign. The chief merit of the book is that, as the author held an important post in the revenue department, he was fully acquainted with revenue administration which he has been described in details.

Tarikh-i-Masumi or Tarikh-i-Sindh is another written source by Mir Muhammad Masum or Bhakkra. This book was written sometimes in 1600 A.D.. Tarikh-i-Masumi gave us a in depth history of Sindh from the date of its conquest by the Arabs till the days of Akbar the great Mughal. The book is divided into four chapters. It gave us a clear picture as to how Muhammad-bin-Qasim conquered the land and what was condition of Sindh, just in the eve of Arab conquest.

Apart from these works there are other chronicles as well which deserves mention. They include the works like-Zaina-ul-Akhbar by Abu Said, Tarikh-i-Masudi by Abul Fazal Muhammad-bin-Husain-al-Baihaqi,. It should be mentioned that some of the general works composed in the time of Akbar are also useful for this period like Akbarnama and Ain-i-Akbari by Abul Fazal, Muntakhav-ut-Tawarikh of Badaun, Tabqat-i-Akbari of Nizam-ud-din Ahmad and Tarikh-i-Farishta by Hindu Beg. Tuzuk-i-Baburi is also an important work which deals with the history of the closing phase of Lodi dynasty.

The travel-stories written by travelers are of great importance for constructing the history of medieval India. The great Turkish traveler Al-Beruni was one of the earliest travelers in India. His famous work is known as Al-Beruni's India. The Italian traveler Nicolo Conti travelled India in 1520. He also gave a vivid account of the manners, customs and conditions of the people of India. Domingos Paes was a Portuguese traveler who also visited Southern India. He also left a detailed description of Vijaynagar. Edoardo Barbosa visited India in 1516 and gave a detailed description of Vijaynagar and Southern India of the period of our study. The world famous traveler Marco Polo visited Southern India in the 13th Century. This travels of Marco Polo is a significant book for the study of Sultanate India. A Persian traveler Abdur Razzaq came as an envoy to the king of Vijaynagar where he stayed for a year from 1442 to 1443. He had given a vivid and realistic account of political, administrative, economic and cultural account of Vijaynagar. There are some literary works as well like Amir Khusrav's Qiran us-sadain and Ain-ul-Mulk Multani's Munsha-i-Mahru which are also worth mentioning works in this regard.

The coins and monuments are important sources for the construction of the history medieval period of India. The Sultans were great lovers of architecture. The architecture which the Turkish conquerors of India brought in this land in the last decade of the twelfth century was not exclusively Muslim or even Arabian. Rather their buildings had the influence of indigenous art traditions. Balban built the Red Palace. Alauddin-Khalji built the Jamait Khan Masjid at the shrine of Nizam-ud-din-Auliya and the famous Ali Darwaja at the Qutub Minar. The Tughluq's erected the tomb of Tughluq Shah, the city of Tughluqabad and Kuffa Firoz Shah. Sikandar Lodi also built Moth Ki Masjid. Sultan Qutubud-din-Aibak constructed the famous Quwat-ul-Islam mosque at Delhi, the Dhai

Din ka Jhoupra at Ajmer, the Qutub Minar at Delhi. There are several other like architectures scattered in many provinces like Multan, Bengal, Gujrat, Malwa, Jaunpur, Kashmir and Dakhin also helped us to form a comprehensive idea about the history of the Sultanate period of India..

Style of art and architecture

The Sultanate introduced two new architectural ideas, the dome and the pointed arch. The dome was an important decorative structure in Islamic buildings, and soon was implemented in other structures as well. The pointed or true arch that was introduced during this period, was completely different from the type of arches that were being constructed within the country earlier. The earlier Indian style of creating arches was to first put up two pillars. The pillars would then be cut at intervals accommodate 'plug in' projections. There would be a sequence of squares that would gradually decrease in size creating an arch. The new artisans introduced the true arch. This was achieved by making the middle stone a key stone and to have the other stones distribute the load of on the two pillars. Conclusion

Painting, also form a significant source to provide the first hand information which has not been earlier utilized in the context of the study of Sultanate period. From these paintings we get visual information, which we may not get from the written text. These painting have illustrated the culture of the period, glimpses of the customs, status of women and influence of composite culture after the coming of the Turks to the country in Thirteenth century. It was a fusion of Persian as well as indigenous elements. Numerous painting of early medieval times exhibit outdoor scenes. They cover the various aspects of everyday life. These paintings show women at work also.