The Story of Human Evolution (FROM THE BEGINNING OF LIFE) 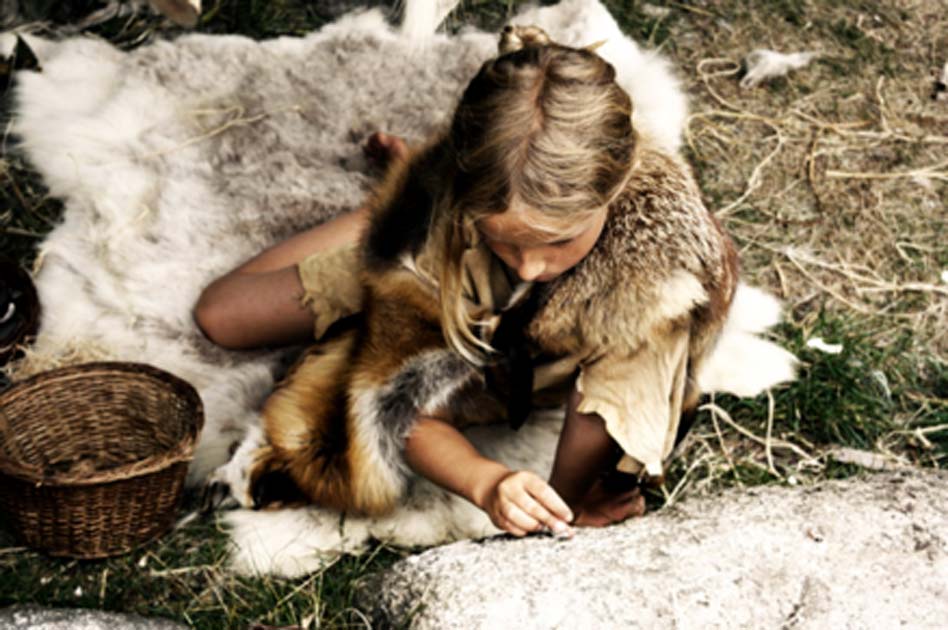 1. The Story of Human Evolution : 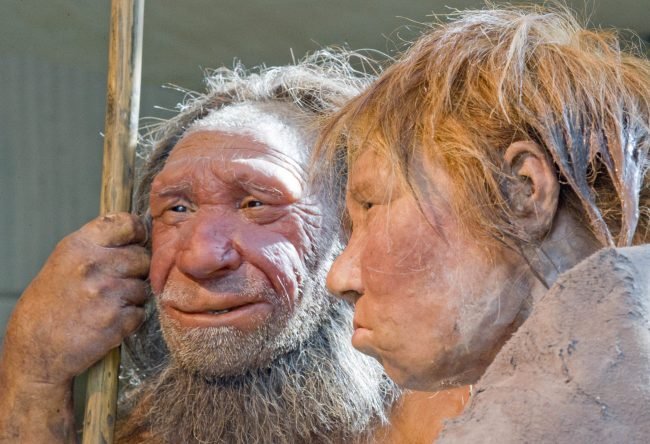 2. The History of Modern Human Beings : 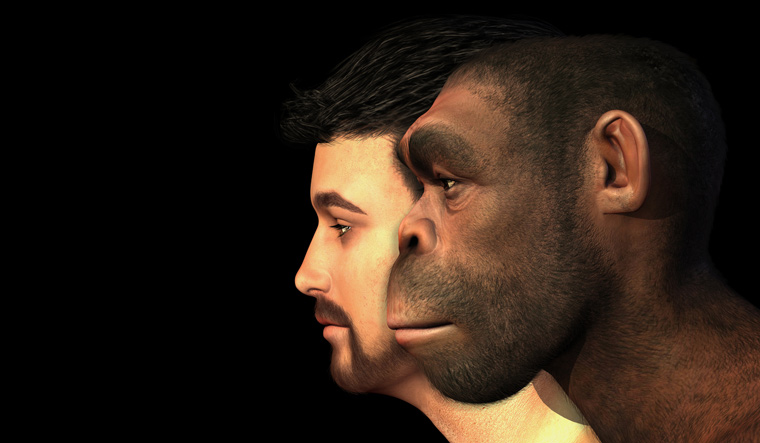 Modern humans primarily Homo sapiens are the only extant members of Hominina tribe for human tribe),a branch of the tribe hominini belonging to the family of great apes. Modern humans orginated in Africa within the past 200,000years before migrating across the world. The issue of the place of origin of modern humans has been much debated. Two totally divergent views have been expounded, one advocating the regional continuity model (with multiple regions of origin), the other the replacement model (with a sinfgle origin in Africa). According to the regional continuity model, the archaic Homo sapiens in different regions gradually evolved at different rates into modern humans, and hence the variation in the first appearance of modern humans in different parts of the world. The argument is based on the regional differences in the features of present-day humans. According to those who advocate this view, these dissimilarities are due to differences between the pre-existing Homo erectus and Homo heidelbergensis populations that occupied the same regions.
The replacement model visualises the complete replacement everywhere of all older forms of humans with modern humans. In support of this view is the evidence of the genetic and anatomical homogeneity of modern humans. Those who suggest this argue that the enormous similarity amongst modern humans is due to their descent from a population that originated in a single region, which is Africa. The evidence of the earliest fossils of modern humans (from Omo in Ethiopia) also supports the replacement model. Scholars who hold this view suggest that the physical differences observed today among modern humans are the result of adaptation (over a span of thousand years) by populations who migrated to the particular regions where they finally settled down. 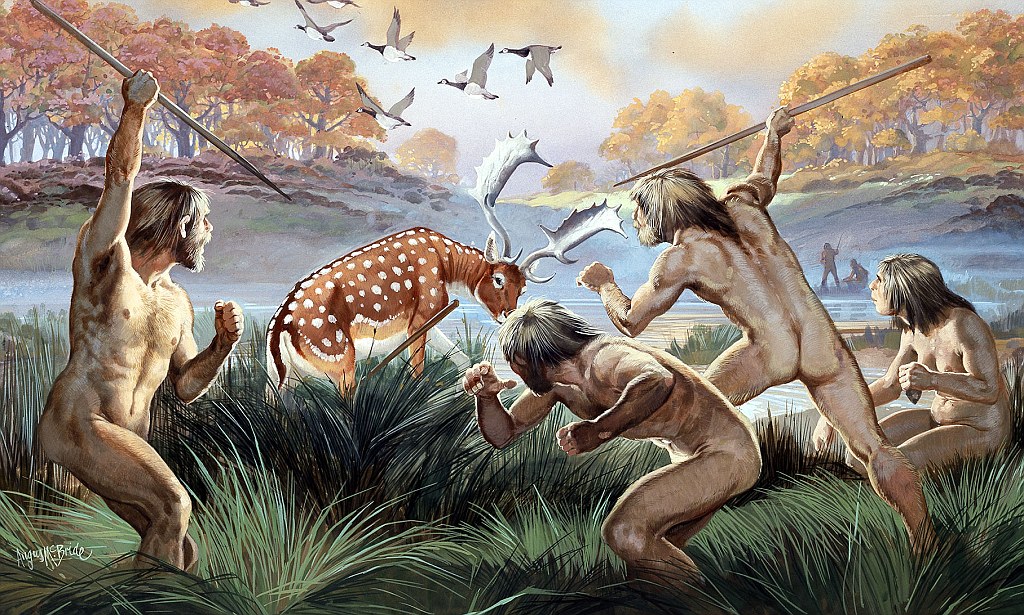 Early humans would have obtained food through a number of ways, such as gathering, hunting, scavenging and fishing. Gathering would involve coliecting plant foods suchas seeds, nuts, berries, fuits and tubers. That gathering was practised is generally asumed rather than conclusively established, as there is very little direct evidence for it. While we get a fair amount of fossil bones, fossilised plant remains are relatively rare. The only other way of getting information about plant intake would be if plant remains were accidentally burmt. This process results in carbonisation. In this form, organic matter is preserved for a long span of time. However, so far archaeologists have not found much evidence of carbonised seeds for this very early period. In recent years the term hunting has been under discussion by scholars. Increasingly, it is being suggested that the early hominids scavenged or foraged* for meat and marrow from the carcasses of animals that had died naturally or had been killed by other predators. It is cqually possible that small mammals such as rodents, birds (and their eggs), reptiles and even insects (such as termites) were eaten by early hominids. Hunting probably began later about 500,000 years ago.
The earliest clear evidence for the deliberate, planned hunting and butchery of large mammals comes from two sites: Boxgrove in southern England (500,000 years ago) and Schoningen in Germany (400,000 years ago). Fishing was also important, as is evident from the discovery of fish bones at diferent sites. From about 35,000 years ago, there is evidence of planned hunting from some European sites. Some sites, such as Dolni Vestonice (in the Czech Republic, see Map 2), which was near a river, seem to have been deliberately chosen by early people. Herds of migratory animals such as reindeer and horse probably crossed the river during their autumn and spring migrations and were killed on a large seale. The choice of such sites indicates that people knew about the movement of these animals and also about the means of killing large numbers of animals quickly.

4. Early Humans - From Trees, to Caves and Open-air Sites : Archaeologists suggests that early humans consumed most of the food where they found it. We are on surer ground when we try to reconstruct the evidence for patterns of residence. One way of doing this is by plotting the distribution of artefacts. For example, thousands of flake tools and hand axes have been excavated at Kilombe and Olorgesailie (Kenya). These finds are dated between 700,000 and 500,000 years ago How did these tools accumulate in one place? It is possible that some places, where food resources were abundant, were visited repeatedly. In such areas, people would tend to leave behind tracen of their activities and presence, including artefacts. The deposited artefacts would appear as patches on the landscape, The places that were less frequently visited would have fewer artefacts, which may have been scattered over the surface, It is also important to remember that the same locations could have been shared by hominids, other primates and carnivores Between 400,000 and 125,000 years ago, caves and open-air sites began to be used. Evidence for this comes from sites in Europe. In the Lazaret cave in southern France, a 12x4 metre shelter was built against the cave wall. Inside it were two hearths and evidence of different food sources: fruits, vegetables, secds, nuts, bird eggs and freshwater fish (trout, perch and carp). At another site, Terra Amata on the cOast of southem France, flimsy shelters with roofs of wood and grasses were built for short-term, seasonal visits. Pieces of baked clay and burnt bone along with stone tools, dated between 1.4 and 1 mya, have been found at Chesowanja, Kenya and Swartkrans, South Africa. Were these the result ofa natural bushfire or volcanic eruption? Or were they produced through the deliberate, controlled use of fire? We do not really know. Hearths, on the other hand, are indications of the controlled use of fire. This had several advantages- fire provided warmth and light inside caves, and could be used for cooking. Besides, fire was used to harden wood, as for instance the tip of the spear. The use of heat also facilitated the flaking of tools. As important, fire could be used to scare away dangerous animals

5. Tools of the Early Humans : 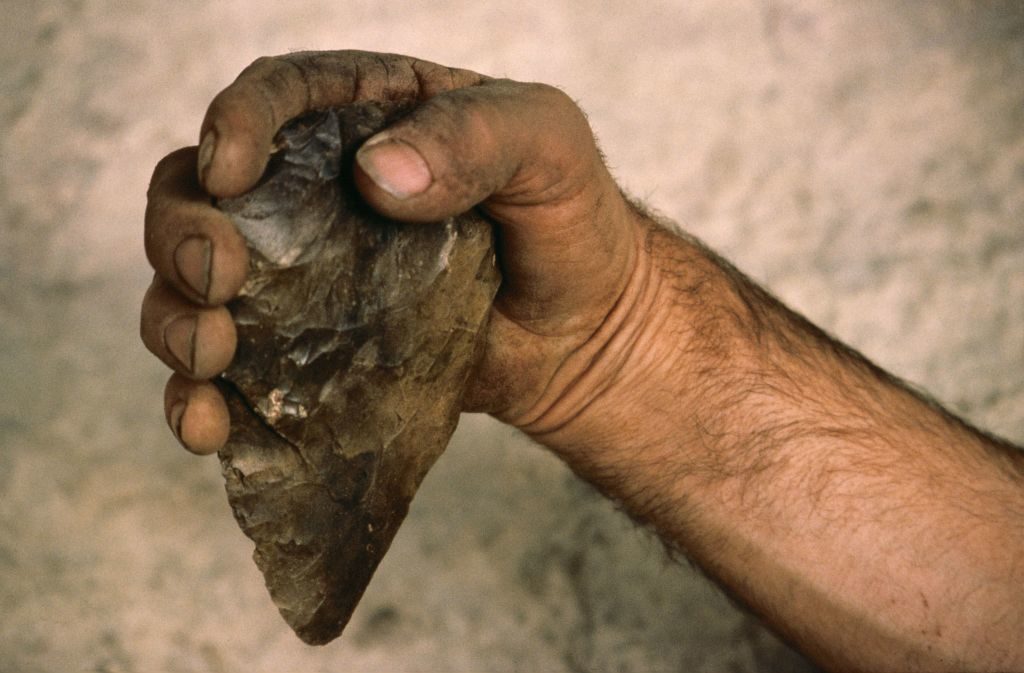 The earliest evidence for the making and use of stone tools comes from sites in Ethiopia and Kenya. It is likely that the carliest stone tool makers were the Australopithecus. As in the case of other activities, we do not know whether tool making was done by men or women or both. It is possible that stone tool makers were both women and men. Women in particular may have made and used tools to obtain food for themselves as well as to sustain their children after weaning. About 35,000 years ago, improvements in the techniques for killing animals are evident from the appearance of new kinds of tools such as spearthrowers and the bow and arrow. The meat thus obtained was probably processed by removing the bones, followed by drying, smoking and storage. Thus, food could be stored for later consumption.
There were other changes, such as the trapping of fur-bearing animals (to use the fur for clothing) and the invention of sewing needles. The earliest evidence of sewn clothing comes from about 21,000 years ago, Besides, with the introduction of the punch blade technique to make small chisel like Tools,it was now possible to make engravings on bone, antler, ivory or wood.

6.Modes of Communication: Language and Art : 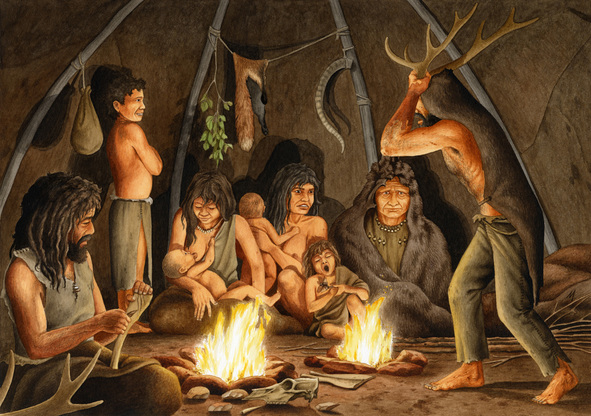 Among living beings, The humans alone have a language among the living beings. It developed through various stages from ancient period.There are several views on language development: (1) that hominid language involved gestures or hand. movements; (2) that spoken language was preceded by vocal but non-verbal communication such as singing or humming: 3) that human speech probably began with calls like the ones that have been observed among primates. Humans may have possessed a small number of speech sounds in the initial stage. Gradually, these may have developed into language. When did spoken language emerge? It has been suggested that the brain of Homo habilis had certain features which would have made it possible for them to speak. Thus, language may have developed as early as 2 mya. The evolution of the vocal tract was equally important. This occurred around 200,000 years ago. It is more specifically associated with modern humans. A third suggestion is that language developed around the same time as art, that is, around 40,000-35,000 years ago.
The development of spoken language has been seen as closely connected with art, since both are media for communication. Hundreds of paintings of animals (done between 30,000 andl2,000 years ago) have been discovered in the caves of Lascaux and Chauvet, both in France, and Altamira, in Spain. These include depictions of bison, horses, ibex, deer, mammoths, rhinos, lions, Dears, panthers, hyenas and owls. paintings For example, why do some areas of ca Several explanations have been offered to these cave paintings depicting animals. One is that because of the importance of hunting, the paintings of animals were associated with ritual and magic. The act of painting could have been a ritual to ensure a successful hunt. Another explanation offered is these caves were possibly meeting places for small groups of people or locations for group activities. These groups could share hunting techniques and knowledge, while paintings and engraving served as the media for passing information for one generation to the next generation...
Go to Link
Getting Info...

I have written and developed this site so that students may learn and understand easily. more..
#Ancient Histo #History #Know the History